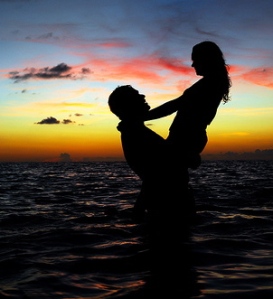 I feel sorry for the boys I dated when I started dating.

I never outright said, “I’m bipolar, you don’t want to date me…do you?” (Hoping they’d say yes.) Nonetheless, this is what my actions said.

I remember the very first time I went on a first date….

Within the first 10 minutes I told him that I’m bipolar. Then I sat there and waited to see what he would say.

There was no second date.

What I came to realize is it is not that he didn’t like people who are living with bipolar disorder. He simply didn’t know me at all.  He didn’t know what to say.  He had no clue of what that meant and how it would affect him enjoying our time together.

I learned from normal dating that telling a guy in the first 10 minutes was a bad idea.  So I wanted to protect myself from being rejected…I waited until I knew that I liked the guy.

Years ago, I decided to try online dating.  I met this guy and told him nothing over the chatting on the internet…nothing over the phone…and let him get to know me on our dates.  We had so much fun together. We had a lot in common (for people in their early twenties), we had similar backgrounds, interests, playfulness etc etc.

He really liked me. We were excited about each other. One night while sitting on the beach on our third date he shared with me that even though he talks about sex a lot that he’s really a virgin and shared his values, beliefs, hopes and dreams. I felt comfortable with him so I decided to share that I’m bipolar.  I felt so at ease that I shared some of my stories and what I’ve overcome and my successes. We felt so connected and bonded after revealing these really important things. We were in fantasy land talking about our future.

The next date he told me that he does not want to see me anymore.

I was so hurt. I couldn’t understand. He seemed so happy about me sharing with him and he rejected me.

Later he told me that it wasn’t personal. He shared that his sister is living with severe bipolar disorder and that he didn’t want his children to go through that.

Even though it made sense…it hurt.

This changed how I did online dating….

I learned very quickly how painful it is to be vulnerable and have someone reject you. It was something I did not want to feel again and I was willing to do anything I could to prevent it.

Therefore, I got in the habit of telling guys on the phone before I even made a date with them.

The way I thought about it was that if we got to talking and liked each other that if I shared that I am bipolar and they still want to go out with me…then its safe…I won’t be rejected.

It was sort of effective dating.

I ended up dating other guys with bipolar disorder and other psychological disorders that didn’t bother me so much because I truly get it and I know how to respond to it; however, I wanted someone more emotionally grounded and stable than me. My choices and behavior wasn’t attracting that.

A number of years ago I experienced a self-controlled hypomanic episode and I thought I was out of the woods…but I was wrong. While still under the influence of mania I was really free, I met a guy online.  My guards were completely down.  I had no attachment to the outcome. I was completely free to say and do whatever I wanted. We hit it off on the phone. I shared with him that I was living with bipolar disorder before we met.  I simply didn’t care how he responded. Without any effort on my part, he clearly saw that I was thriving and successful in how I live with bipolar disorder and wasn’t concerned at all.

On our very first date we had the “love at first sight” experience. We were in each others arms referring to each other as “soul mate” by the end of the first date.

By the second date, we were planning our lives together and talking about future marriage. We just knew that even though we didn’t know each other that we were meant to be together.

The following weekend he went on a camping trip with his friends and I was not invited.

While he was gone, I freaked out. I didn’t even know his last name.  I panicked because the “relationship” was happening way too fast for me.

So I texted him sharing that I needed to slow down.  I sent him probably 100 text messages while he was gone without him responding to even one.  I was on an out of control emotional rollercoaster.

When I didn’t get a response from him I kept trying to correct or explain the previous message. I couldn’t control myself. I got angry and sad then rationalized my feelings all in texts to him. I just kept impulsively texting trying to explain myself. When he didn’t respond, I couldn’t stop rollercoastering and expressed every thought and feeling I had.

It turned out that he didn’t have phone service while he was camping.

He got all of my text messages at once.

When he got home, I received a text that said, “Never contact me again.”

I tried to explain myself, that it was mania. He didn’t care and wanted nothing to do with me.

Dating with bipolar disorder is really hard and can be very painful…but it is doable.

Building a loving, nurturing and healthy relationship is possible.

We will explore building relationships in another blog.

I invite you to share your dating stories and bloopers in the comments section.